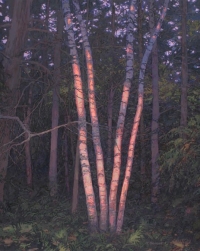 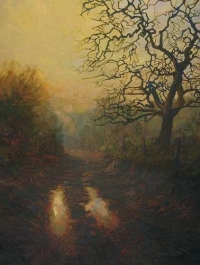 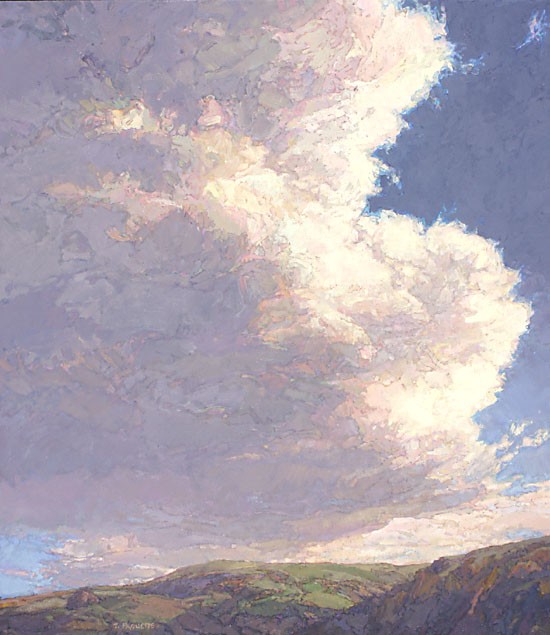 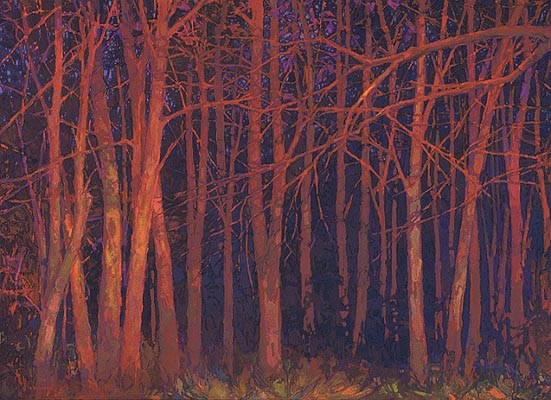 An Interview with Thomas Paquette

This interview took place in the artist’s studio, behind his home in Warren, Pennsylvania. The winter sunlight poured through the windows and skylights. Illuminated within was a neat and ordered workspace filled with paintings at various stages of completion, with all imaginable amenities for a painter. The paintings show a great sensitivity to color, and attention to both temperature and texture. Intense, arbitrary colors show between areas of carefully mixed grays. A typical Paquette painting begins with a thin layer of arbitrary saturated color, which peeks through the upper layers of paint, resulting in a luminous image.

RK: You travel a lot, always heading to a different locale to discover your next subject. Do you find as much pleasure seeking out scenes to depict as painting them in the comfort of your studio?

TP: It’s actually fairly difficult to find a good place to paint the gouaches because I don’t use an easel, so I have to sit down, and there are all of these different variables that can make it very uncomfortable or difficult. But I love being somewhere else, somewhere new, so it’s as if I’m inside the painting at that point. When I’m here [in the studio] I feel like I’m the creator of a universe in a way. So one is living inside the canvas, and one is in the studio creating the canvas. They’re different, so I can’t really equate them.

That painting, for example: I could tell you exactly where that was, and then you would go there and say “Oh my God, I don’t know what he’s painting.” That’s just the nature of painting in the studio and that’s the beauty of it for me, that I can switch it all around.

RK: Describe your process, from the gathering of material in the field to finished studio painting.

TP: Initially, I’m not always sure what route leads to a composition; I usually just recognize it somehow. If it’s a thing where I only have a moment to capture it, sometimes it has to come from a photograph. Often times I know that I’m going out in search of a painting and I’ll do a gouache on site. Then typically I bring it back to the studio and work from it [as a study for larger oil paintings], or I’ll work on small oil panels on site. Usually, though, the gouaches and panels don’t get finished on site. I only have a couple of gouache paintings that I ever finished on site, so I don’t think of myself as a “plein air” painter even though I work outside.

RK: How close to the color of an observed landscape do you aim for, and what way are the under colors decided upon?

TP: It’s pretty arbitrary. I wind up going in different directions and try to capture something new. I mean, there is this general constellation of things that you wind up returning to but, in general, I’m more open-ended about it…unformulaic.

RD: In many of your paintings color is easily seen, pieced together like a puzzle. Is there a method involved when developing the amorphous-like shapes of these color chunks?

TP: I really just paint. A reviewer once wrote that my paintings are highly stylized – it wasn’t a negative review – , and I thought, “Stylized?” I see it as me just applying paint to the canvas. To me, it’s something I stumbled into and it happens when the painting seems to develop that way. You get drawn to little things as you work that wind up being something that somebody calls a style, but you didn’t start out by saying, “I need a style and I’m going to paint like this”.

RK: But you do have a particular style now after working through it, so do you feel that your style will change?

TP: I hope it changes. It’s not a static thing. It’s whatever the painting demands, not what I impose on it. It’s a cooperative thing. That’s what I respect about Picasso, though I don’t like a lot of his work. You almost hear him saying, “I don’t give a damn what anyone expects; I’m going to paint a painting.” The fact that he gave up on so many different styles is what I admire about him a lot. That’s important.

RK: When I think of painters that emerged from Maine, I think of the innovative and unique styles of artists like Rockwell Kent and Winslow Homer. Do you think that the ten years you spent in Maine, with its rich tradition of landscape painting, played a large part in developing your own personal style?

TP: That’s a good question, but no. I mean, I do like Rockwell Kent’s work a lot and I did see more of it while I was there and got more into it, but only as a parallel, because I was already doing things along those lines. The rich landscape tradition is partly because it’s a rich landscape. I moved there to paint the landscape, not because of any tradition.

RK: I was present at a recent opening where you briefly explained how the physicality of the paint plays as important a role as conveying a recognizable depiction of a landscape.

TP: It’s always a concern. It’s not about the technical; it’s about appreciating what happens on the canvas. Photorealist painters, for example: it’s interesting to see how they have vanished into their painting, but it’s not as interesting to me as someone who can … for example:

I saw a large Sargent show when it came to Boston several years ago, and he had done a painting that was probably eight feet high by forty or so feet wide. It was a war scene from World War One. From a distance it read as a tight, snappy painting, but then you walked up close and saw there was almost nothing there. He barely had any paint on it, he just washed it on and it congealed only from a distance. How he did that is absolutely astonishing, and to do it on a big scale is amazing. But I like to see it on any scale. That’s what I try to make sure is in all of my work. If my painting doesn’t work up close then I don’t care if it works at a greater distance. I’m not talking about a greater degree of realism; I’m talking about an interesting paint surface.

RK: One of the most interesting aspects of your large-scale paintings is that they appear as two separate paintings…one from afar where you can clearly see a landscape, and a second, more expressive painting emerges as you step closer. A whole other painterly world is discovered in terms of paint physicality and texture, and the color shapes that emerge. Are you aware of this as you create a work?

TP: Yeah, it’s a great concern, and there’s no point in doing a painting if it doesn't pass your own test. It’s got to be able to work on those levels for me, and I think most artists would say the same for their work, but I suppose I’m kind of hyper-aware about it.

Have you seen Monet’s “Water Lilies” up close? They are not water lilies, they are encrusted paint…they are just like this here (points to encrusted paint on the front of his easel). That’s exactly what they look like up close. I love that. I don’t even like them much from a distance, and the smaller you see a reproduction of it the more they become a realist painting, in a way. They are almost two paintings in one and I think that’s fascinating.

RK: Landscape has been a favorite subject in art. With all of this baggage to consider, as an artist living in the 21st century, how do you lend contemporary validity to your work?

TP: First of all, it’s not that old. Some of the first pure landscapes only go back to around the 18th century. It was 19th century landscape painting that has some parallels with what I do today. I think it’s a good question, and I want to address it on a couple of levels. The natural world is being diminished to such a degree that people are paying attention to the landscape as an important part of our world. It’s a very contemporary issue. What is our environment, what do we live in? That can’t be ignored politically anymore. Not as a subject matter for painting, per se, but as a reality, something to consider. It is, in a sense – even though I’m not using it as a political vehicle for making a statement – a contemporary subject. And again, it’s not that old! It’s more contemporary than painting people. Also, from a formal point of view, I’ve always found it to be the most open-ended and inclusive of all subjects.

I happen to have a strong environmental bent. There are certain scientific issues that I bring to it, in my own mind at least. Species, times of year and day, geology, geography…all interest me a great deal. So is that contemporary? Yeah, because we’re studying all of these things and we don’t know all of the answers about so many different things. It’s a non-question!

That’s the thing: I just don’t care. If it strikes a chord with people, that’s a boon, in a way. But it’s really not the important part. I think some of the best things people do are either so far out that you can’t even call them contemporary. Or they sometimes hearken back thousands of years. I find both fascinating. Art doesn’t have to be defined as contemporary to be interesting.

RK: I believe it is necessary to be genuine in the idea behind one’s work and not to just make sure that something’s “in”.

Somebody yesterday asked me, “Do you ever do portraits?” Oh, my God, I’ve painted portraits and people but…it just isn’t that interesting to me.

We’ve gotten to the point where people are pigeonholed that way. But I find there’s so much to do within what I am doing – the adventure within making a painting where it’s thick paint, or with washes and glazes or something very direct. I feel like I’m ten different painters already. I’m happy that I like doing landscapes but I wish in a way I could also find time…

Yes, I have narrowed my scope a little bit. You have to. I think that I could get a lot out of doing something totally different. Doing a portrait, for instance, could be interesting, but it might take a year out of my life before I would realize that I had accomplished something. I feel like, “How long do I have to live?” I might as well get working on what interests me. Thinking that the end of the world may come tomorrow, that pushes me a lot. I don’t literally think that it’s coming to an end, but life is short; why not go for what you really want to do.