Richard Ozanne (b. 1959 St. Louis Mo.) is a preeminant visual artist as well pianist from a family background of musicians. He began his studies in the arts at 4 years of age, training as a pianist as well as a visual artist.
His parents were the world noted concert pianists and teachers of piano Ozan Marsh and Patricia Benkman. Richard began his formal art training in the adult drawing, painting and figure classes of art held at Chautauqua Institution  in I967. He continued his summer vigil of training at Chautauqua until 1986. From 1978 until 1982 he enrolled at the  University of Arizona, Tucson Arizona, graduating with his BFA in 1982. He attended the Art Students League of New York in late 82/83 until 1986 studying in an intensive program of painting, drawing, composition, design. His teachers in the program were: Robert Beverly Hale (Drawing Anatomy), David A. Leffel (Painting) [Ted Seth Jacobs (painting) During thw period 1984-86 he also studied at Columbia University Graduate School under Leon Goldin  towards his post graduate degree in Art.  In 1992 he received his MFA from Arizona State University, Tempe Arizona and continued his studies inclusive of a Phd in the subject of Arts and Humanities in Europe. During his career he has appeared in exhibitions across the United States as well as in New York City in solo and group shows.

During the 1980's he has been invited to the former USSR and the PRC Peoples Republic of China their ministries of culture, to visit and travel their countries. In 1980 he received a commission for  a portrait of Dimitri Kabalevsky, noted classical composer that was completed and exists in Moscow today.

During the work has been featured in many prestigious galleries, venues and in print in New York City, Europe and New Zealand as well as other countries.

Ozanne  is the recipiant of many accolaides and included in reference books in his field and has appeared in Art News Collectors Edition and Art in America and reviewed in Manhattan Arts New York City.

In 2006  he returned to the US after a 7 year residence in Europe and several extensive tours wher lived, exhibited  and taught as artist resident in Prague Czech Republic and Torino Italy.

Marquise Who's Who -Whos Who of Raising Americans (1990)

Who's Who Historical Society

"Millennium Hall of Fame", First Premier Edition, Inclusion and Dedication to the Artist- (I997)

The International Directory of Distinguished Leadership.

(Hall of Fame-Inclusion for Richard Ozanne- for all subsequent issues)

"International Who's Who of Intellectuals", Cambridge IBC UK

The Diciple Magazine, Cover Art-Inclusion in Story " A Resurrection in Art" cover story April 1990, Vol 17 No 4 pp.8-10, Journal of the Christian Church (Diciples of Christ) Ref.

Portfolio and 3 DVD set of artwork and images are available to serious prospects and agents.

"Leading Intellectuals of the World" 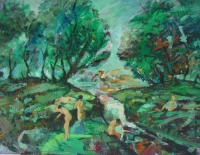 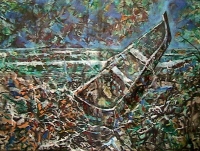 The painting \"The Boat\" has a very subtle message of Hope the the viewer. It has been exhibited a number of times in Italy. Acrylic on Canvas.