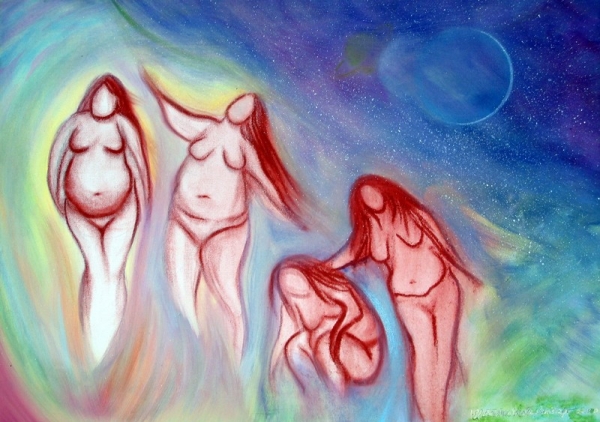 Natasha Smoke Santiago is a turtle clan woman of the Haudenosaunee or People of the Longhouse otherwise known as The Iroquois. She resides within the territory of Akwesasne. Natasha has been an artist for as long as she can remember. She works in many mediums, favoring Acrylics and Oil Pastels and often includes cloth, beadwork and other materials into her paintings. She also works with clay doing pottery and sculpture. Natasha is heavily influenced by her Haudenosaunee heritage, history and teachings. She also draws upon the experiences of her life as inspiration for her works. Much of her work tells a tale, or has a story behind it, thus she calls her web site "The Storyteller's House". Often times Natasha's work is seemingly drawn from another realm, her hand and mind guided by an external force, a phenomenon she has dubbed "a spark". Her best work stems from these "sparks". Natasha currently resides within the Mohawk Nation territory of Akwesasne, along with her husband and two children.

Natasha, I spoke with Beth Bashara from our Oneida Nation Arts Prog. and is the prog. that funded us and who help put the guidelines and application together. We looked at the application and the guidelines and realized there was not difference between the applicants of the international and national potters. She is putting a follow up I will send to you, Pete, Tammy and Brenda. She said what I have planned with the Haudeenaushaunee people will be approved with funds for car travel, housing and meals. We will work everything out so all are comfortable. What else may you have for discussion? Did I get to it, what you were concerned about? The symposium is taking off and I am pretty busy with working on pots and planning this and a lacrosse expo in Aug. '14.

Hello Natasha, last winter I bought a print from you, in which currantly hangs in my dinning room.. In Onondaga. I live in North Carolina, & I am a lifetime friend of Alicia Cook. I'm looking to purchase another print from you, to put in my living room. Something that has browns, tans,& a little red maybe. I love your work..
Oneh,
Lana Burnam 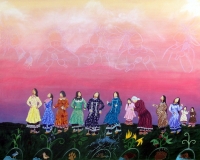 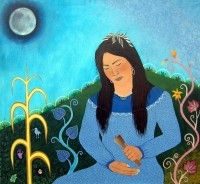 Acrylic, Cloth, and Feathers on Canvas.