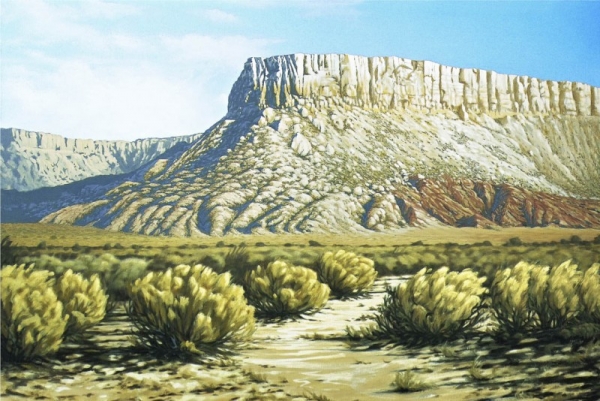 Robert Lee Benjamin, a New Mexico resident since 1971, was born in Martins Ferry, Ohio on August 23, 1951. He spent his childhood and teenage years in northeastern Ohio. Painting his first oil painting at the age of 10, Benjamin knew that life as a creative person was his future. Loving encouragement from his mother was strong motivation for young Benjamin to continue his interest in art. Above is a picture of Bob at the age of 14 painting an oil landscape on a 4'x4' panel. He started the first successful "Art Club" at State Street Jr. High School, Alliance, OH. While still attending Alliance High School where he graduated in 1969, he won several state and national awards for his commercial design, once winning a journalistic award for editorial cartooning at Kent State University. After graduation, Benjamin moved to Pittsburgh, Pennsylvania to attend the Ivy School of Professional Art. Although he enjoyed living and studying in Pittsburgh with its museums, galleries, and rich cultural offerings, he wanted a broader natural setting to continue his fine art pursuits. On arriving in New Mexico in 1971, Benjamin worked as a graphic designer and illustrator while continuing to develop his fine art techniques. He also worked in a frame gallery to frame his own paintings and drawings. Within five years, Benjamin was working under the direction of Master Printer Ben Adams at Western Graphics, a lithography studio. Benjamin worked on many notable artists drawings in preparation for printing to pay for his own hand-pulled lithographs to be printed. He made friends with many known professionals in the art world such as Charles Lovato, Jerry Ingram, R.C. Gorman, Travis Witfield, Russell Hamilton and Earl Biss. During this time, Benjamin sold entire editions of his contemporary southwestern original prints to a national distributor, American Designs, Ltd. Benjamin's fine art prints sold widely throughout the United States and are enjoyed by public and private collectors alike. While working at Western Graphics, Benjamin became restless for a new medium and decided to study another form of original multiples; bronze sculpture. He studied casting techniques with artist/caster A.J. Keith and art foundry owner Tommy Hicks, of Shidoni foundry in Santa Fe. In January 1980, Benjamin and a partner opened Southwest Bronze, a sculpture foundry and artist's contract studio in downtown Albuquerque. Many artists published sculpture editions under Benjamin's guidance. At Southwest Bronze, Benjamin taught classes in bronze sculpture casting and mold-making techniques to many artists. He became known for his generous sharing of information as well as being a knowledgeable art publisher. Benjamin later studied steel sculpture fabrication at the University of New Mexico with sculptor, David Anderson. After closing Southwest Bronze in 1986, Benjamin found himself involved in many design projects. He enjoyed designing children wear for an international market. He was also an art director for advertising agencies. In 1992, Benjamin attended computer classes at the University of New Mexico to further his illustration skills and design career. He enjoys many awards in the commercial art world and also designed silver jewelry that are still being manufactured today. In 1995, Benjamin returned to landscape painting full time, studying with impressionist landscape painter Les Hawks. Many of Benjamin's original lithographs have found their way into museums throughout the Southwest, including a traveling exhibit Lithography in New Mexico, part of the Education Division of the Museum of New Mexico and the New Mexico Museum of Fine Art, both in Santa Fe. The Roswell Museum and Fine Art Center, Roswell, New Mexico, and the Navajo Tribal Museum, Window Rock, Arizona, each has prints in their collections. Benjamin is also represented in the collections of the Phoenix Sky Harbor International Airport, Phoenix, Arizona, and the University of New Mexico Hospital Cancer Research and Treatment Center in Albuquerque. Robert Benjamin is mentioned in American Artists of Renown, a Wilson Publishing Co. Book printed in 1982. The Smithsonian Institution, National Collection of Fine Art, Washington D.C. also has in its prints and drawings acquisition an original stone lithograph of "Coopers Hawk" drawn by Robert Benjamin. His last large bronze sculpture of the Sandia Mountains ( a 1: 24,000 scale) is of Albuquerque's eastern boundary. This bronze sculpture is displayed permanently at the New Mexico Museum of Natural History. Benjamin's beautiful works of art can be found in various forms around the United States and abroad. Benjamin was the "New Mexico Magazine 2001 Distinguished Calendar Artist", featuring twelve New Mexico landscapes in pastel. Robert Benjamin lives in Albuquerque where he enjoys his cherished daughters and artist friends. He continues to paint the southwestern landscape and designs art in many forms. He has also established a painting studio in Rosebush, Michigan.

I'm a landscape painter and a commissioned house portrait painter.

You have said some "Lithography in Mexico"
I really don't understand what is that.
Can you explain a bit further

Such lovely pictures. I am a nature lover and I really say that these pics are adorable

The picture of the mountain you have posted is one of the best shape mountains. But one thing I want to tell you that there are many of such shape mountains. I have already seen aroound 5.
One is near to Shirdi in India. While you go from Indore to Shirdi by Road it is there close to Shirdi.

I am loving what you have said and the landscape pics...I LOVE IT

Beautiful landscapes! I've featured you on the front page.