The Moral Evolution of Man

Posted Nov 5, 2005
Last Updated Jun 21, 2012
I propose that there has been a moral evolution of man. As the centuries have progressed so has the capacity of man to treat his fellow man with respect. Slavery while still a practice is at least not a state sanctioned practice. The acceptance as equals of persons of divergent racial background has improved. The rights of women have improved.

These thoughts are nothing new and fit well inside the philosophy commonly called, "Humanism" . What question I ask is perhaps new: "Has the moral evoulution of man reached a plateau?" "Will the moral evolution of man actually regress?"

Often there is the misconception that mankind develops morally as he develops technologically. Granted some technological advances, especially in medicine have been of great benefit. However the same science that cured disease has produced weapons. Technology is neutral when it comes to moral development, it neither helps or hinders. We need a measure different than technology to determine if we are becoming a society with a greater moral conscience.
I would argue that the measure of morality has to be the ability of persons to live in peace, to have mutual respect and to have some level of cooperation which is mutually beneficial.

Why care about the moral evolution of man? Well simply put the future of all life on the planet depends upon the moral choices each society makes: "Should a nation without nuclear weapons seek to develop them?" "Should a nation that has a stockpile of nuclear weapons use them?" "Can the nations agree to reduce green house gas emissions?" "Will the moral milestone of the Geneva Convention become something of the past?" All the important questions are being asked now.

You can't blame the political leaders. The moral evolution of man either foreward or backward is dependent upon the philosophical presuppositions a majority of society embraces as their own. Politians usually legislate what a majority of the people want or feel they need. The opinions of the polititian are known before they are elected, what they will do is predictable, the people decide who best represents their views. Hence the views of you and I are what determines how our particular society is known. The values the society embraces will become the policy the polititians adopt.

We the people, are the ones responsible for determining the moral evolution of man. We choose to move foreward or backward. 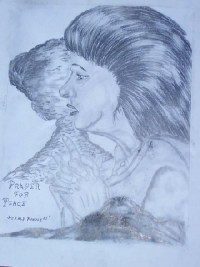